Open for automation standards and IT world

The new controls support Ethernet-based M2M communication based on OPC UA and Sercos as well as all other common real-time Ethernet protocols. With an expansion of the OPC UA information model, IndraMotion MLC improves the exchange of data between automation components of various manufacturers and offers transparent access to all higher system functions.

OEMs can use the Open Core Interface to directly access control functions in a range of high-level IT languages and implement individual functions independently. This direct function access to all control elements allows the integration of smart devices; IT automation applications; and the virtual commissioning of control units without real machines. OEMs can thus program, commission and optimise their machine controls parallel and even prior to assembly of the real machine, significantly reducing development time for new concepts.

In addition to the previous broad range of IT operating systems, development environments and programming languages, the newest version also includes the easy programming of sequential command chains with the lean and compact script language Lua.

The IndraWorks engineering environment accelerates PLC-based engineering. The powerful script interface “Automation Interface”, for example, automates recurring engineering tasks, which previously had to be performed manually. With the ECAD data interface, control cabinet planning for programming and documentation – which previously had to be entered manually a number of times – can be omitted during construction, at the control cabinet builder, and then during commissioning. IndraWorks continues to utilise the circuit diagram data, which are created one single time in EPLAN Electric P8, directly in PLC engineering.

All Bosch Rexroth electric drives, controls and control systems are distributed and supported by Tectra Automation. 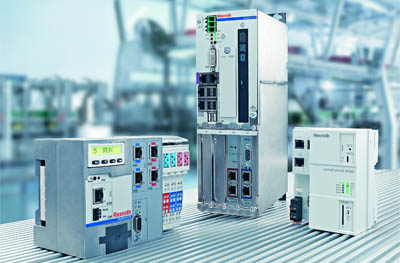