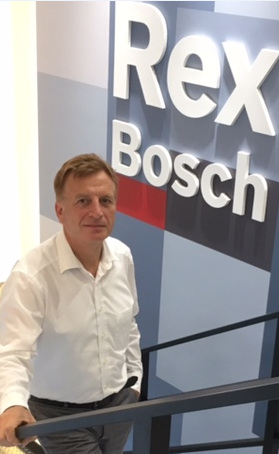 His task involves the implementation of product management in the Linear & Assembly Technology department in order to provide complete support and extensive application knowledge to the Tectra Automation sales team.

Edgar’s most recent position was as Transplant Manager in China for Bosch Rexroth, where he managed existing and new Bosch customers in the country for six years. “In China, the term “transplant” in designations like Transplant Manager pertains to foreign customers that run production of any kind,” Edgar explains with a wry smile. In addition to his stint in China, where he managed to double the transplant business between 2010 and 2013, Edgar accrued additional international experience within the Group working in the United States for one year and in Taiwan for three.

Having implemented product management for linear and assembly technology in China, a similar function to the one he is tasked with here in South Africa, and his role as Chairman for the VDMA (Mechanical Engineering Industry Association) in China for Bosch Rexroth while stationed there, puts Edgar in the ideal position to carry out his expected role.

Married to Petra for 34 years and a father of two, Edgar, who obtained his degree in mechanical engineering in Nuremburg, Germany, lists his leisure activities as running, biking, swimming, playing golf and hiking. He admits to wanting to travel in South Africa, listing the Kruger National Park, Cape Town, Durban and Stellenbosch as holiday destinations he would like to visit, as well as to experience the Garden Route. “I’d like to get to know more about the people in South Africa and this wonderful country,” he says.

“We congratulate Edgar on his appointment and will provide all necessary support wherever required,” says Kevin Lombard. “We wish him the best for the years ahead and have no doubt that with his expertise and international experience, he will take Tectra Automation’s linear and assembly technology offerings to new markets.”