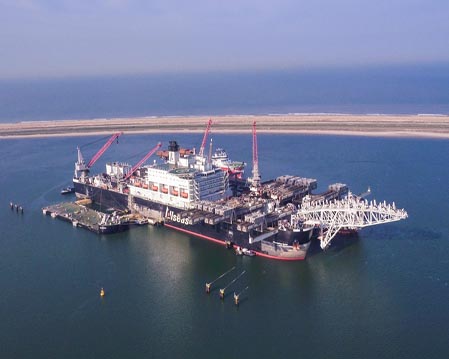 “It is the ultimate piece of machinery! You cannot find a ship with more equipment than this one.”

It was the biggest assignment Bosch Rexroth in Boxtel had ever faced, and it took more than two years to carry it out. But they seized the opportunity with both hands to research and supply the hydraulic components and associated local controls for the innovative lifting system on board the Pioneering Spirit, conceived and developed by Allseas. It is capable of lifting offshore oil platform topsides weighing up to 48 000 tons and jackets up to 20 000 tons.

Pioneering Spirit is especially designed to lift entire offshore platforms from their piles in a single movement. Allseas, who owns the ship, had developed a complete motion compensator system and associated control system for the ship, including the software for the principle behind the motion system. At this point they approached Bosch Rexroth in Boxtel to further develop the hydraulics design and lifting beam component arrangement for the new lifting system. Supplying specialist hydraulic components and drive systems also formed a part of the project scope.

Over two years in development

Allseas engineers had already developed the form and functionality of the ship, as well as the principle of the lifting beams for the topsides lift system. Working with Allseas, the Bosch Rexroth engineering team investigated hydraulic, electrical and hybrid combinations of both technologies as control options for the individual lifting beams. Countless tests were carried out and simulations performed during the development phase in order to find the optimal solution. After more than two years of development Bosch Rexroth was given the job of manufacturing and supplying the hydraulic components and drive systems for the individual beams.

The motion compensator system, which consists of 16 lifting beams operated from the bridge, is activated during preparations to raise a platform. Using these beams, the platform is raised 2.5 m in a single fast movement, detaching the platform topsides from the structure. The twin-hulled Pioneering Spirit, which is 382 m long and 124 m wide, is now capable of lifting the top section of a platform from its piles in only 9 seconds. Once the platform is detached from the substructure the ship carries the topside towards shore.

According to Allseas, the emergence of Pioneering Spirit signifies a step-change in offshore installation and commissioning. “It is the ultimate piece of machinery – you can’t find a ship with more equipment than this one,” says Wintjes.

The bow has a 122 m-long and 59 m-wide slot that enables Pioneering Spirit to move around a platform and lift and transport entire topsides using eight sets of horizontal lifting beams. For jacket removal and installation, two 170 m-long lifting beams, which can rotate on hinges, are located in the vessel’s stern. Complementing the lifting system is a 5 000-ton special purpose crane for additional lifts such as lighter topsides and jackets, modules and bridges.

Apart from a few ‘catalogue components’ like valves and plunges, the majority of components and subsystems, including cylinders, control devices, generators, mounting plates, etc., were developed specifically for this project. Also newly developed were the local digital control systems’ hardware and software for the lifting beams.

The first job, lifting the 13 500-ton top section of the Yme platform off the Norwegian coast, successfully took place in August 2016. Subsequently the remaining four lifting beams, with Bosch Rexroth components, were installed on Pioneering Spirit for larger lifting jobs. Then, in April 2017 in the North Sea, the vessel redefined heavy lifting with the single-lift removal of shell’s iconic 24 000 ton Brent Delta Platform – a world record for an offshore lift! 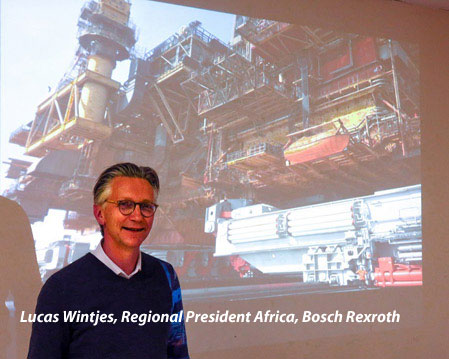 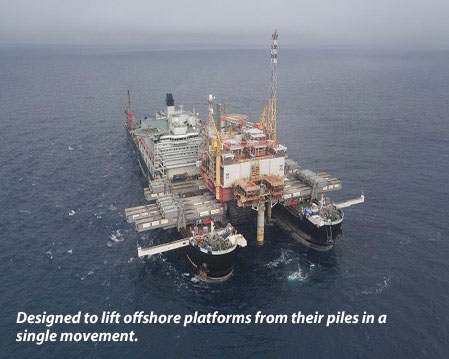